The Lulua people live in south-central Democratic Republic of the Congo, along the shores of the Lulua River in the north and the Kasai River in the west. Taking influence from the powerful artistic traditions of the neighboring Luba, Chokwe, and Kuba, the Lulua developed highly sophisticated art forms of their own. Their remarkable statuary stands among the foremost of these.

The figures they created reflect an intense philosophical concentration on physical beauty, expressed in the Chiluba term bwimpe, which denotes physical perfection as a measure of moral integrity. This unity of beauty and goodness was shown through anatomy as well as scarification and other forms of skin modification. Such beautifying marks are depicted in the elaborate relief designs that decorate the bodies of some Luluwa figures. Idealized beauty, beyond both the aesthetic and the philosophical, was also intended as an invitation to the ancestral spirits to inhabit the sculptures and actualize their intermediary role between the natural and supernatural worlds.

The ritual figure presented here is known as bwanga bwa bwimpe. This is a female type with a prominent maternal belly and bulging umbilicus, holding in both hands a mortar and pestle. The characteristics of ideal beauty are most clearly shown in the large head with high, round brow and serene, wide-set eyes, along with scarifications on the face and neck. A tall, horn-shaped coiffure projects from the crown of the head, a reference to clairvoyance and ‘second sight.’

As an icon of bwimpe, such a figure would have been regarded as a defense against witchcraft and malignant spirits. Bwanga bwa bwimpe were objects of significant ritual focus and commonly received frequent ritual coatings of oil, kaolin, and red camwood powder.

F. Webb, probably purchased at the H. Pareyn sale, Antwerp, December 1928. Henry Pareyn was a collector in Antwerp, Belgium and was active from 1905-1928. 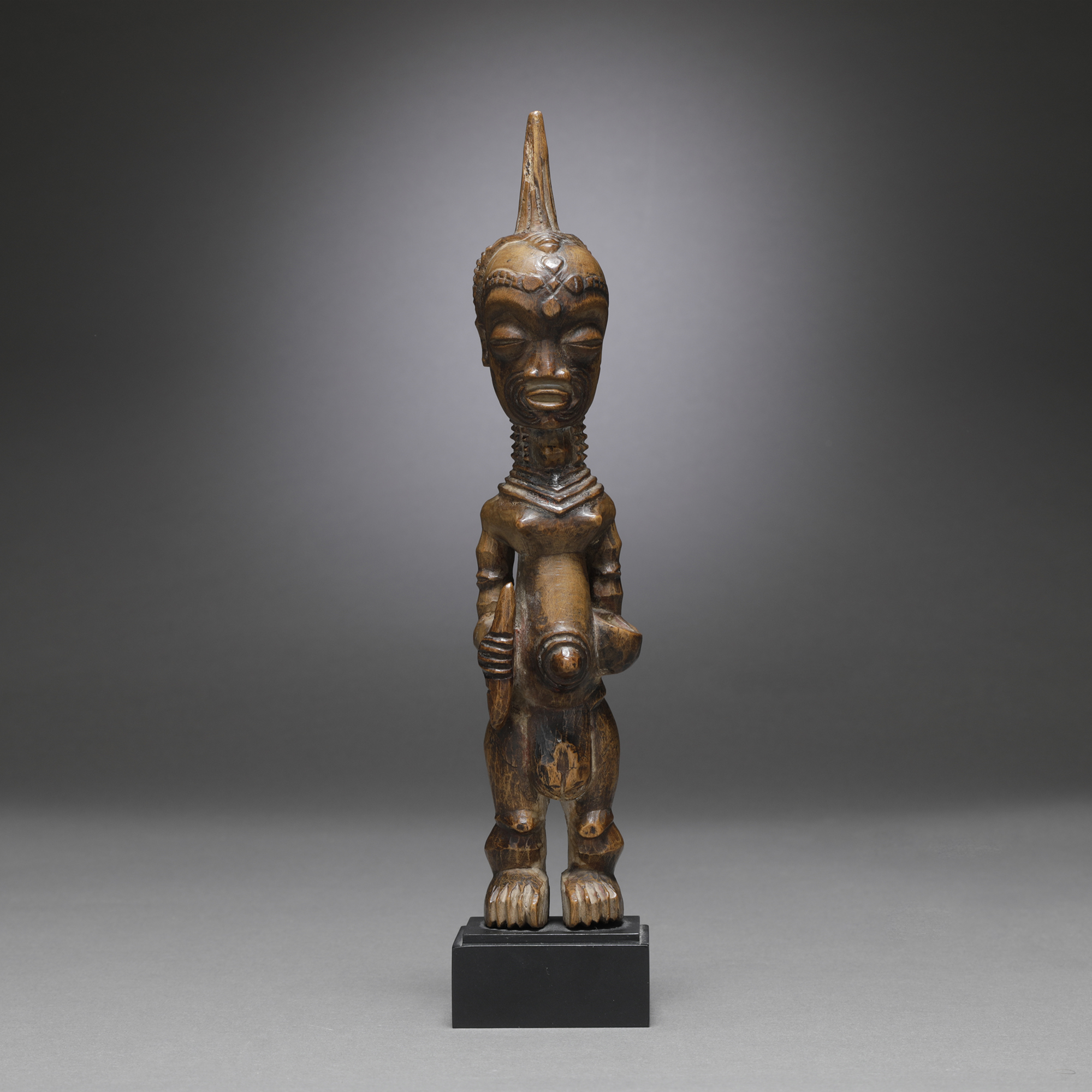 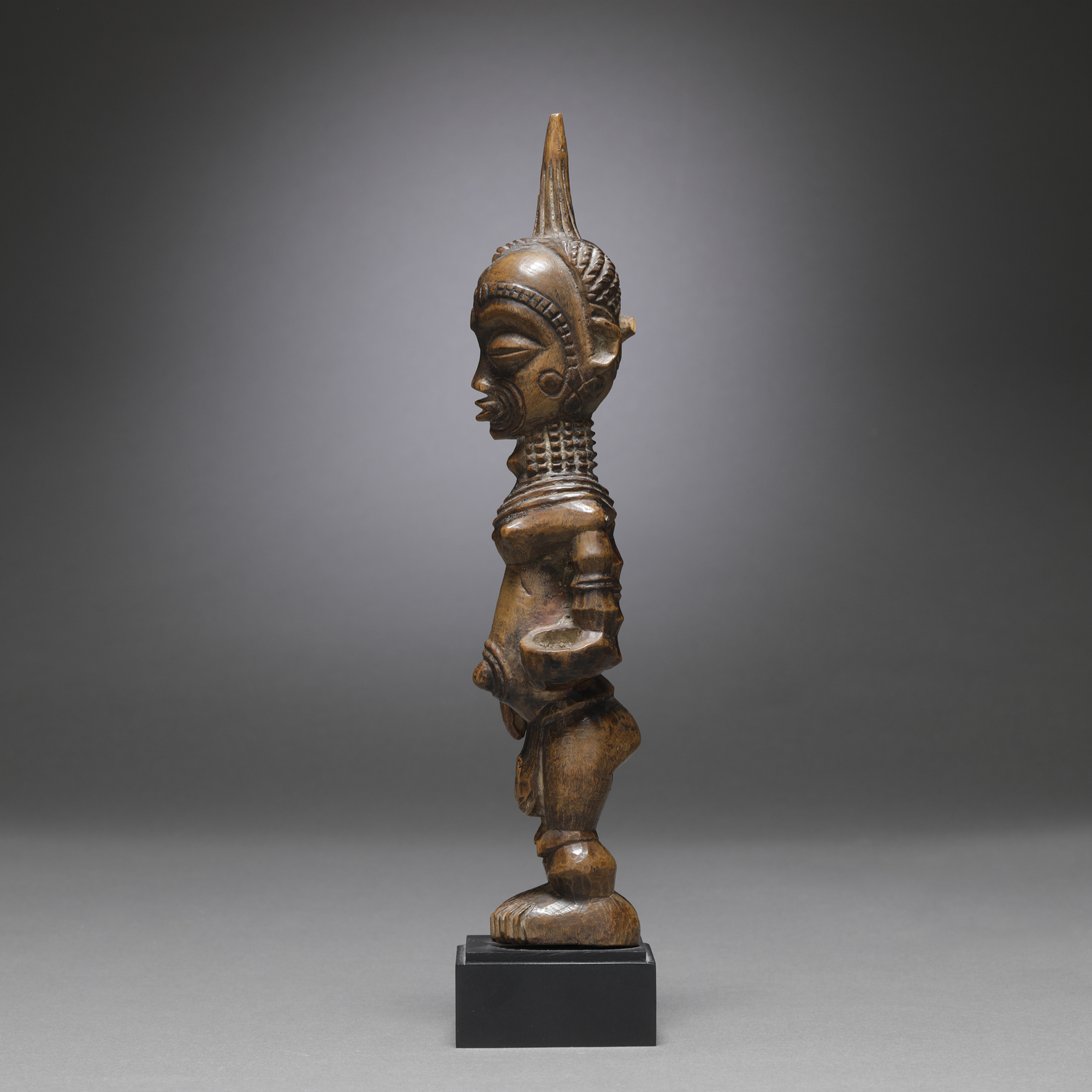 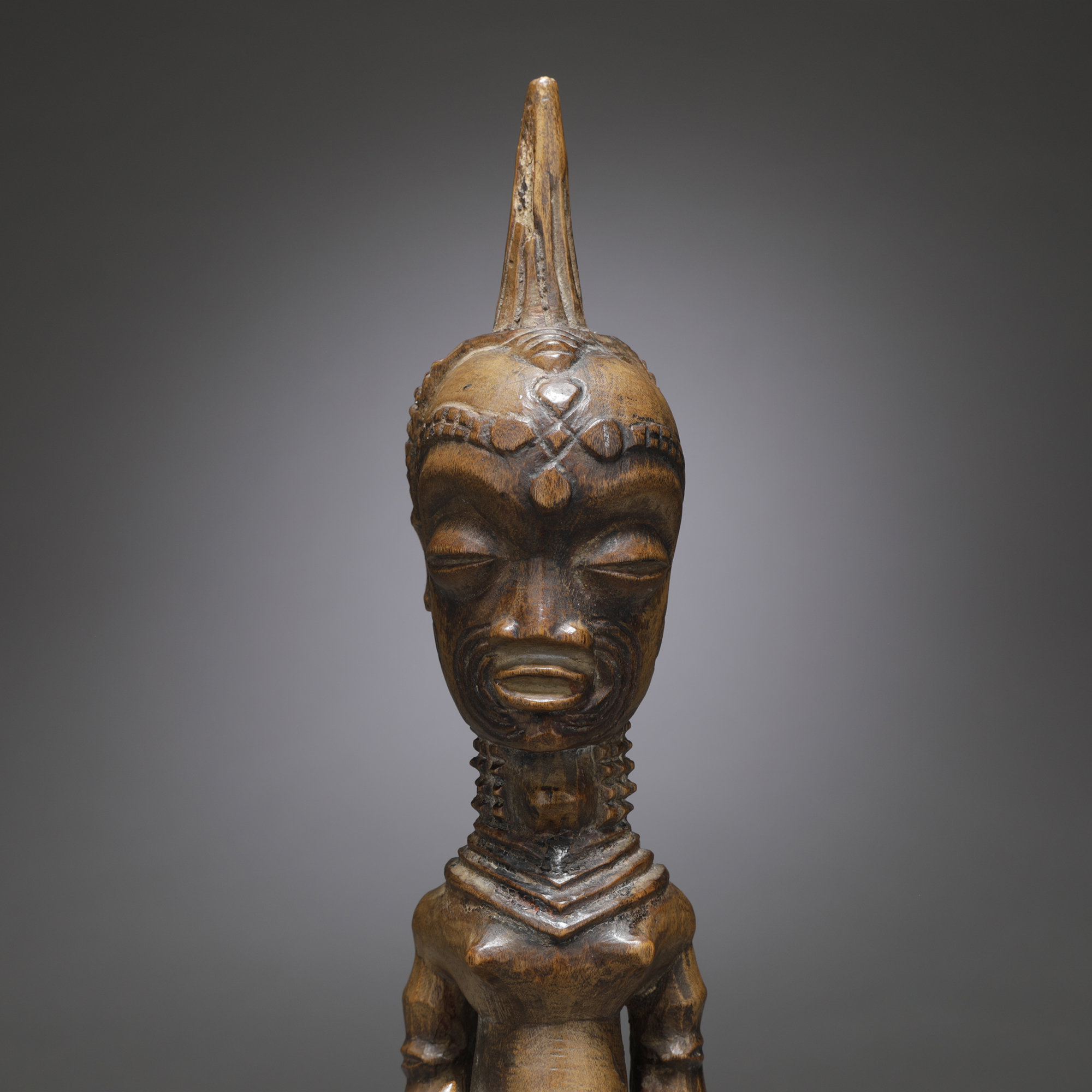 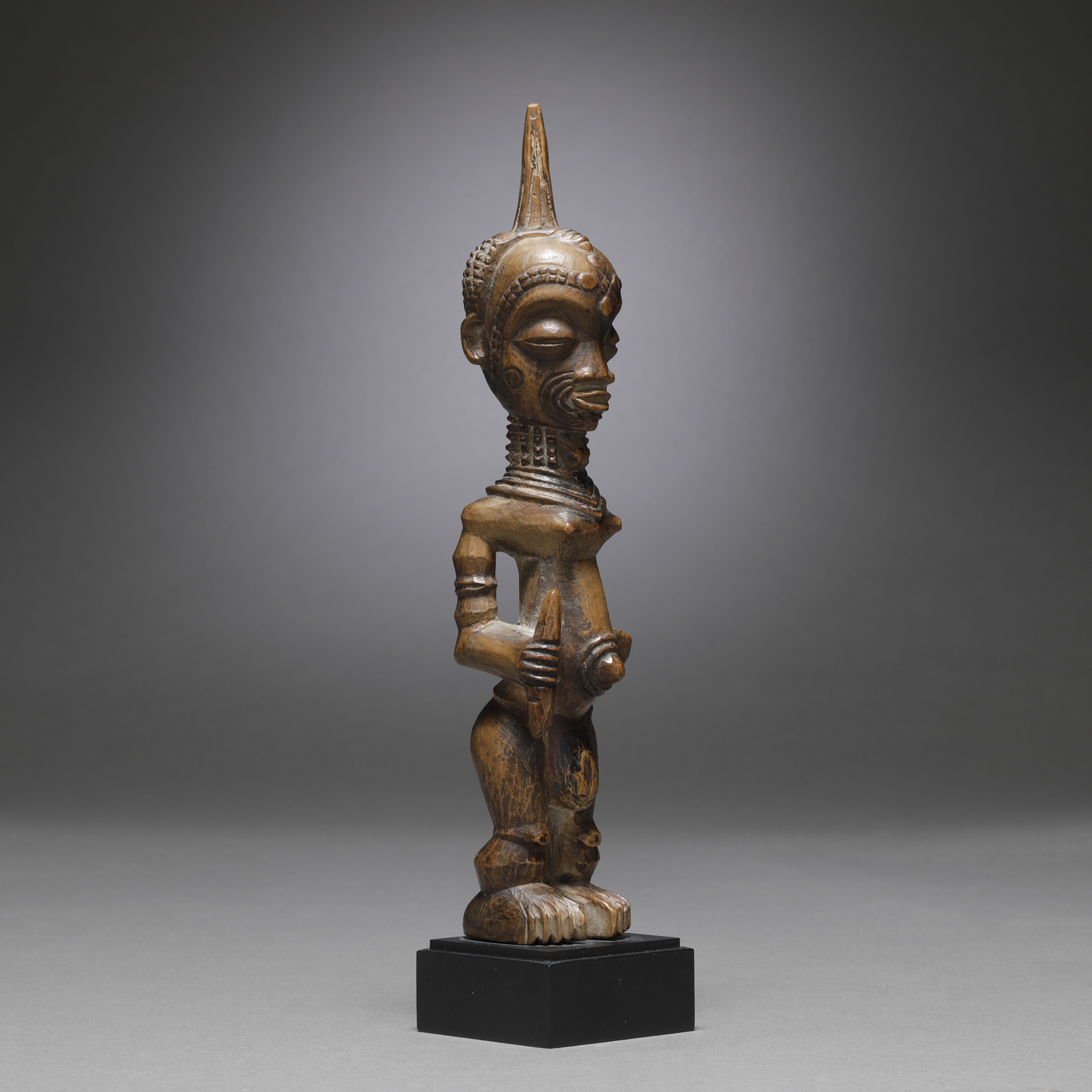 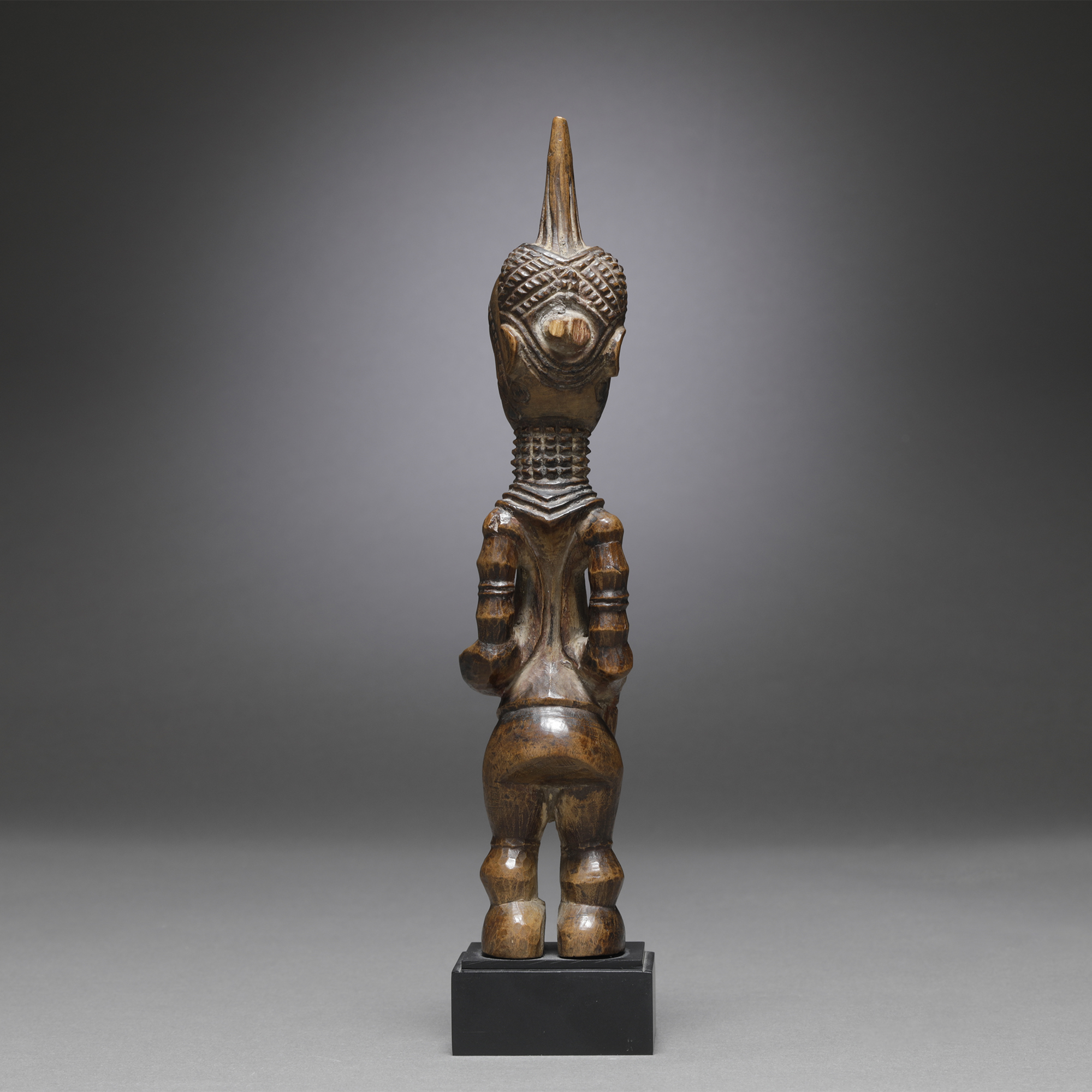