Of singular design, this remarkable bowl, apira ni farunga, from the Solomon Islands of Melanesia rises beyond the level of being purely a ceremonial vessel to a dramatic tableau as the artist has ingeniously decorated the receptacle with figurative elements that act not so much as caryatids as ceremonial acolytes as they present the contents of the bowl with their outstretched arms at the sides of the vessel.

The striking bowl is supported on a single domed base placed at the centre of the vessel’s underside; from the tapering curves of the base, the bowl flares in contrapuntal architecture as it expands into its rectangular/oval form. The sides of the bowl are undecorated until they approximate the lip of the bowl, where, at the sides we observe sharp angular geometric motifs rendered as staggered bands that follow the curving contours of the bowl’s lip.

At both extremities of the bowl, we find a heroic human figure, expressly defined by the corporeal elements that act in tandem to grasp the bowl and present its contents to the viewer. Using almost exclusively the power of their arms to grapple the challenging expanse of the bowl’s curvature, the body of the figures is suspended to bring the hips and legs inwards so that they make contact with the bowl through their knees as a secondary point of compression and, as the lower legs bend downwards, with their feet, which they bend upwards to touch the underside of the bowl with the toes. The slight distension of the abdomen and torso of the figures imparts an engaging and humble character to the figures. The musculature of the arms is defined by the modelling of upper and lower arms, which stretch forwards and outwards to their limits as the hands, with well-defined digits, grasp the sides of the bowl and allow the figure to present the ceremonial foods within in a feat of great acrobatic ability.

Holding the bowl tightly, the figures are forced to also support the physical challenge with their chests, which they join to the bowl as well as their necks, which allow the heads of the figures to rest on the wide lip of the bowl as they look inwards to overhang the concavity of the bowl beneath them. Unlike the frigate birds seen on other ceremonial bowls or the canoe prow figures, toto-isu or nguzu nguzu, which face outwards for considerations of design and symbolic value, the present figures focus their attention on the contents of the bowl and the attendant ceremony in which it features.

The heads of the figures are sculpted in a manner reminiscent of canoe prow ornamental figures – the extended, exaggerated mandible creates a prognathous jawline and approximates, morphologically, something zoomorphic. At the end of the jaws, the mouth is held open with full lips and the detail of dental rows within.

A dramatic nasal feature accentuates the face of the figures – with an oversize ridge, it travels the length of the angled face and terminates in a slightly Roman nose with a curving tip and visible nasal wings. The ocular features are assumed into the concavity from which the nose emerges. At the top of the head, a foreshortened forehead gives way to a fascinating stylized coiffure – at the top of the head, a cap-like extension sits on the curving plaits of hair that flow downwards and backwards, where they are suspended over the back of the figure in the graceful curl of a flip.

According to Magali Mélandri and Sandra Revolon, the Reverend Léopold Verguet, a Marist missionary who visited the island of San Cristobal in 1846, described the preparation of ceremonial foods, on a base of ripe coconut, presented in these bowls: “Men are exclusively engaged in the preparation of these pastes; their preparation is forbidden to women. Once prepared, the paste is done, it is removed from the cylinder, placed in the great bowls carefully made from a single piece of hollowed wood and painted in black. They align the bowls in the shed and decorate them with leaves and flowers. The tribe then come together to feast as a group.”1 Mélandri and Revolon comment further that “...these bowls, which are still used by Solomon Islanders, are used in funerary rituals known as farunga. These ceremonies are held on the initiative of a dignitary some five to ten years after the initial funeral and develop in two important stages: the first, called ratai matafu (trans. ‘finish the tombs’), takes place when the stones or cement screed have been laid or poured over the tombs of the dead.

The second phase, muri ni nuni (trans. ‘after a person’), takes the form of a second funeral that bring definitive closure to the mourning period. It is a common belief that the farunga has the objective or reminding the dead of the land or money that they have left to their heirs. The principle is to spend for the dead and to thank them for that which they have left us.”2

Irene M. Beasley, Sunningdale and Brighton, by descent from the above

John. J. Klejman, New York, acquired from the above

Martin and Faith-Dorian Wright, New York, acquired from the above on January 16, 1968 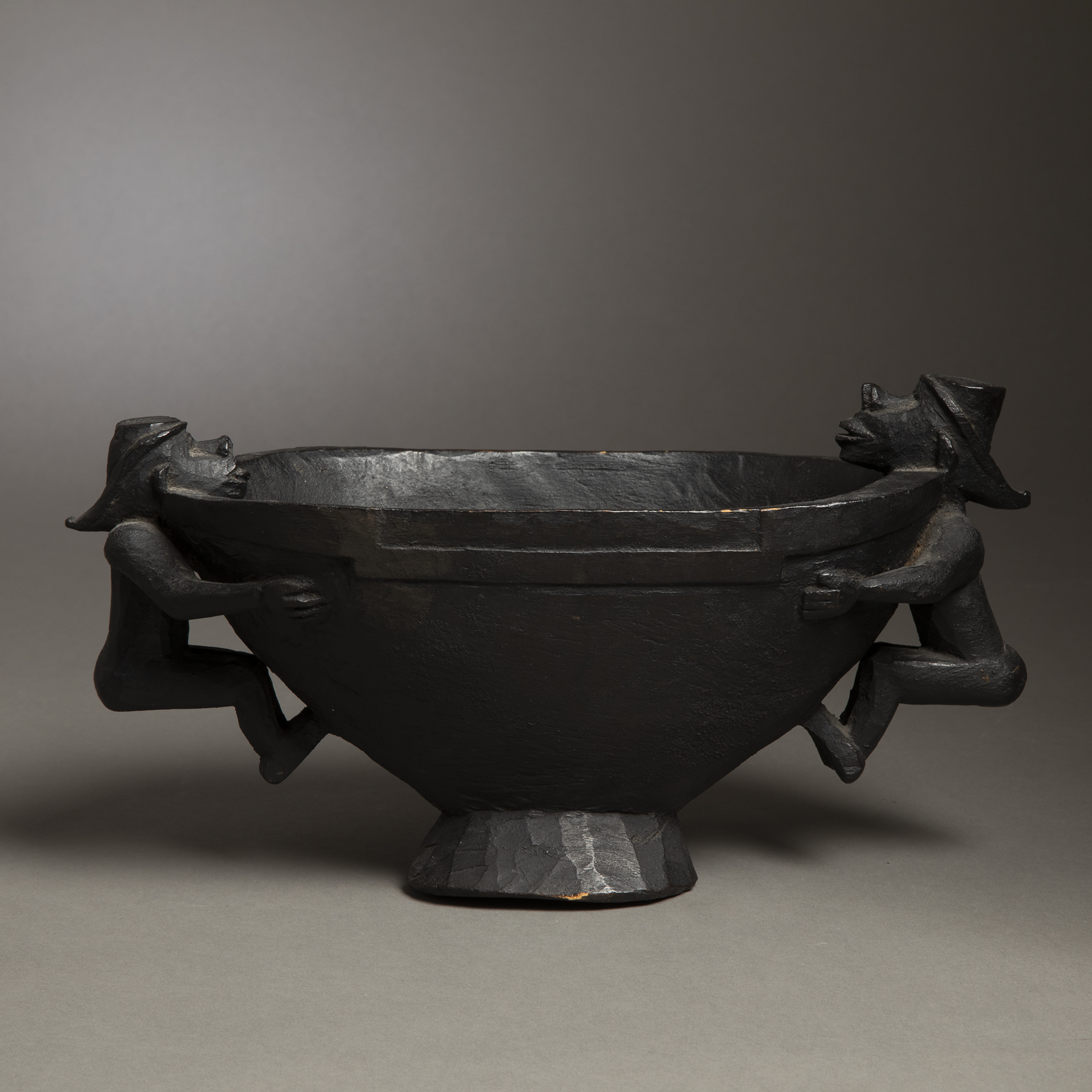 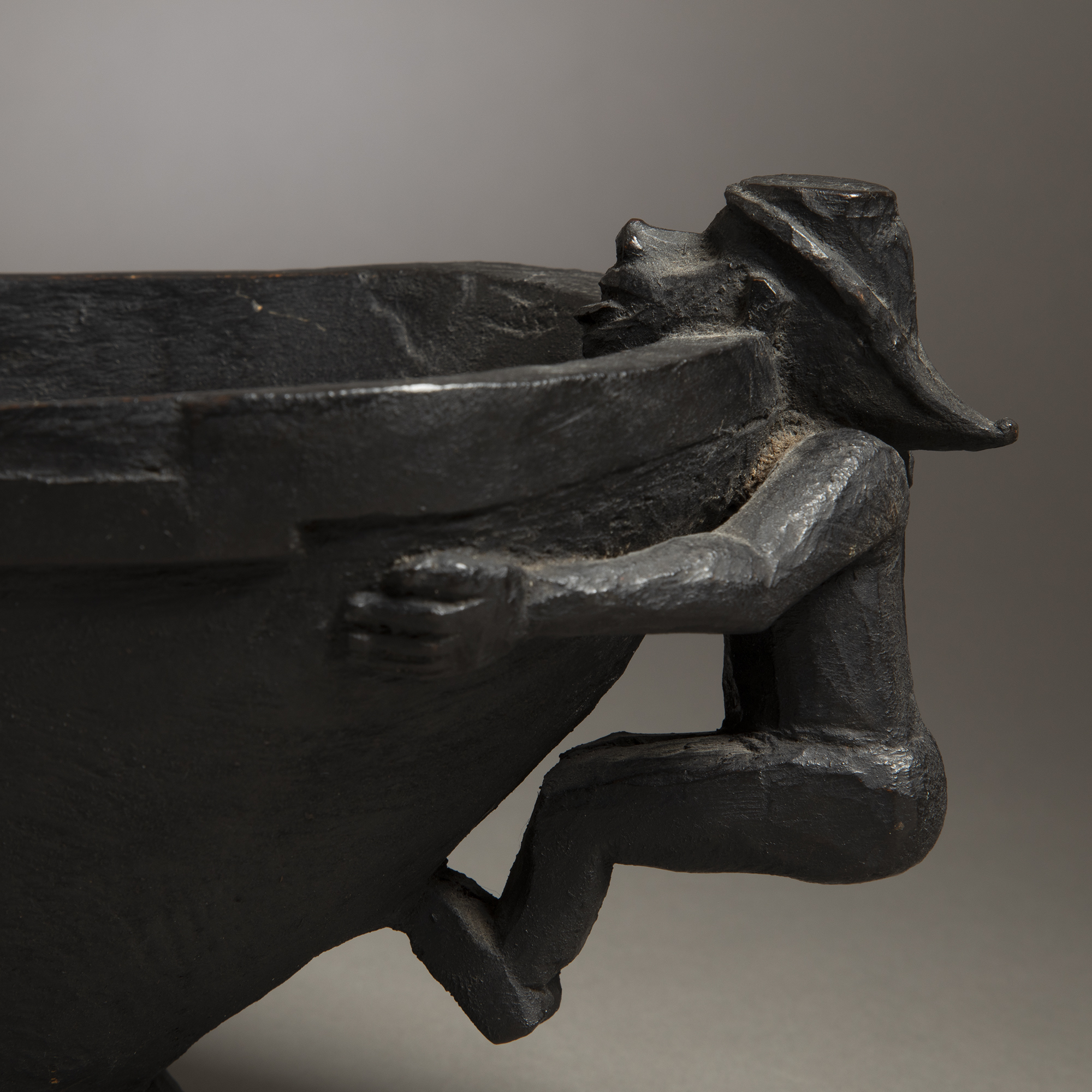 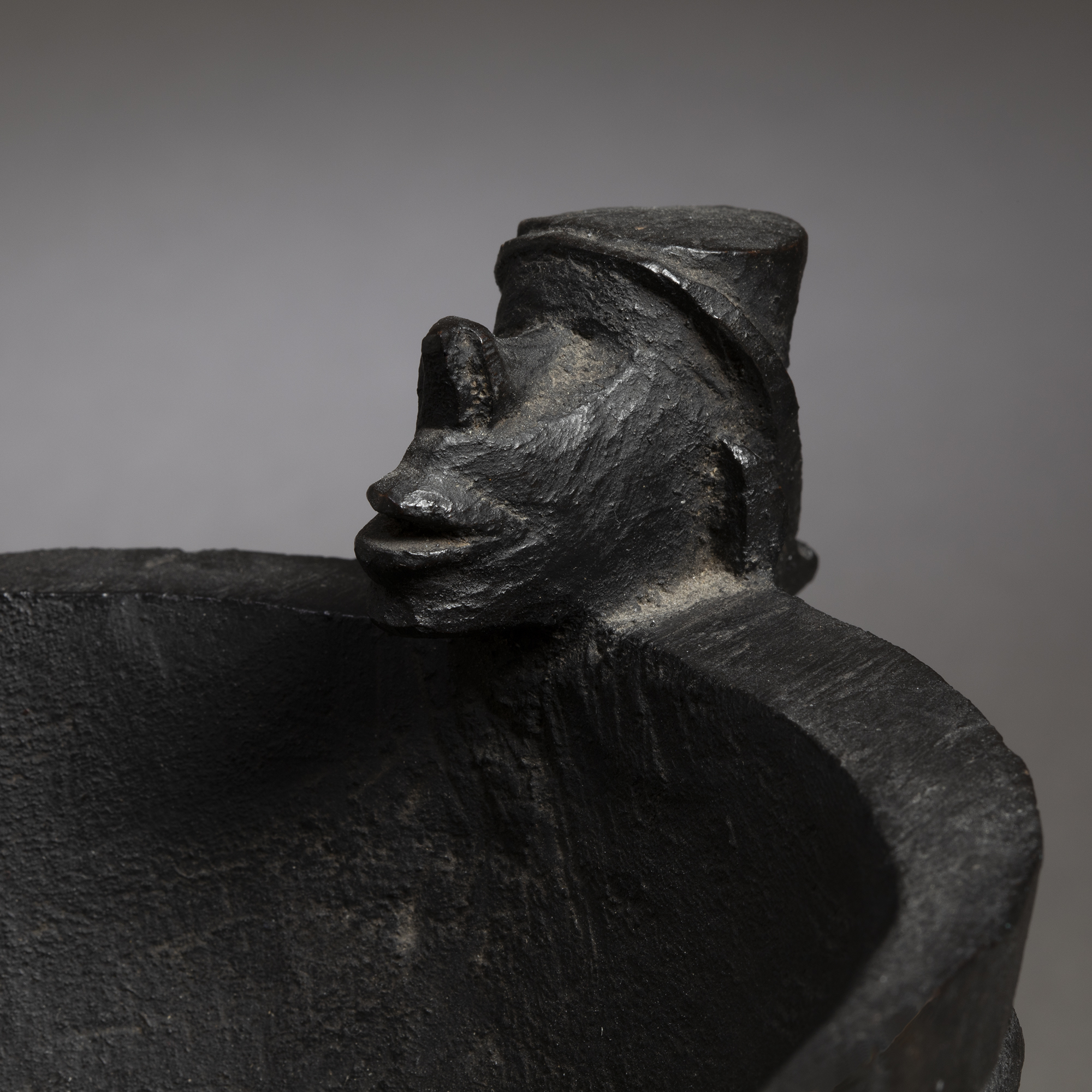 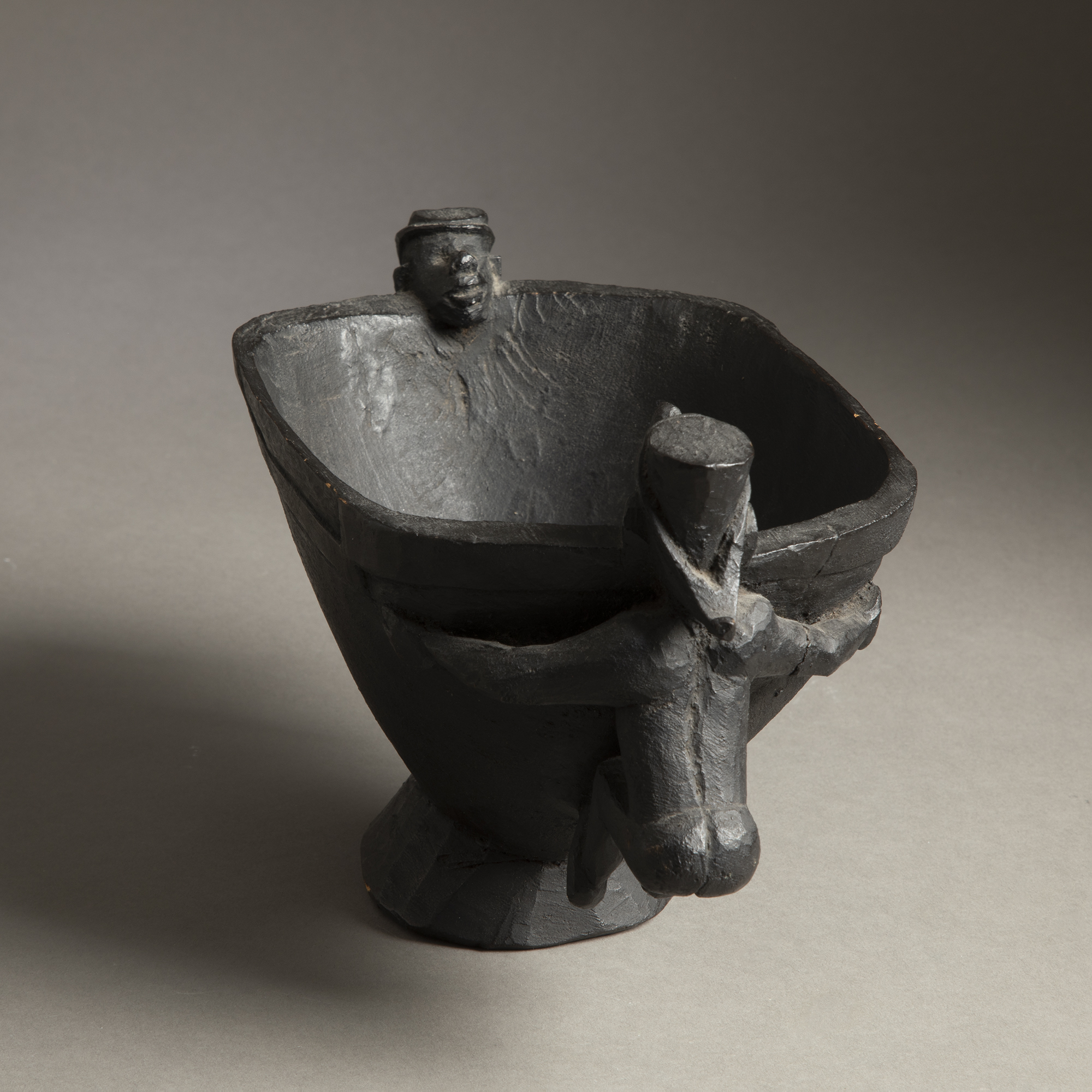 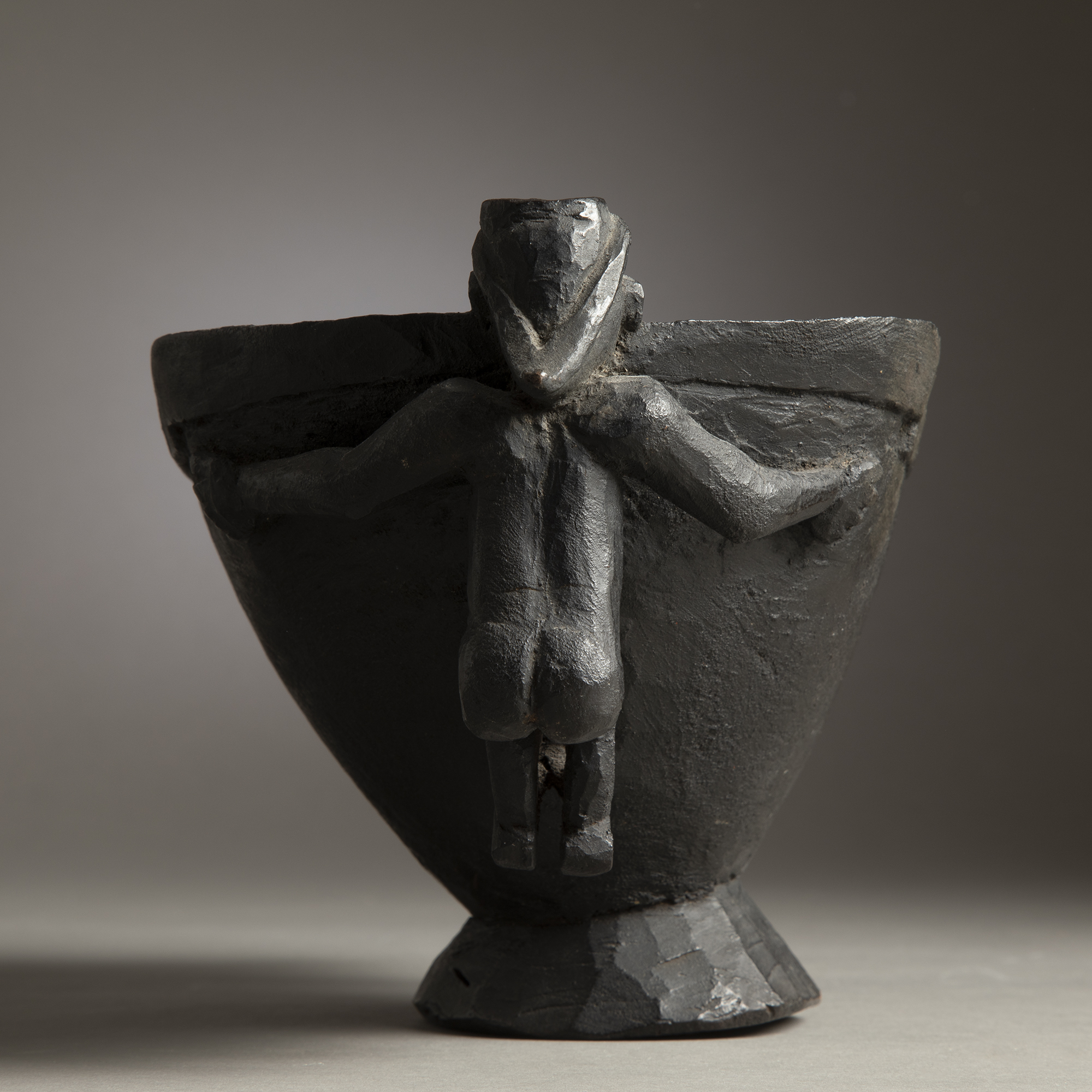